Ketamine seems to be good for everything; procedural sedation, induction of anaesthesia, pain management, depression and now severe alcohol withdrawal?

These authors from the heavily drunk city of Pittsburgh point out that there is a good reason why ketamine might work. Ethanol, like ketamine is also an NMDA receptor antagonist. I didn’t know that…

We have traditionally only targeted the GABA receptor. But perhaps there could be some benefit with also hitting the neglected NMDA.

This was a chart review comparing outcomes in 29 patients before and 34 patients after a guideline for ketamine infusion was instituted in their ICU. The infusion was at 0.15-0.3mg/kg/hour continuously until the delirium resolved. This is about 10-20mg/hr in an a 70kg adult… not very much.

Mean ICU days were almost halved. There were shorter mean hospital days, less benzodiazepine use and the rate of intubations plummeted (see table below for more details).

But before we get too enthusiastic, we need to remind ourselves this is very low-quality evidence.

There were no methods to their chart review, and they did not appear to use prespecified outcome measures. Retrospective data can be of poor quality etc.

But the biggest issue is the retrospective nature of this study. The small before and after groups could have been rather different to start with… like comparing apples to oranges. Therefore, the observed differences may have had nothing to do with ketamine.

Some would say the evidence of ketamine in severe alcohol withdrawal is as weak as vitamins for sepsis!

In the end, what would I do?

I could easily be proven wrong, but I might consider this low dose ketamine infusion if I had a suitable patient with severe ethanol withdrawal… and I would also give them some vitamins. 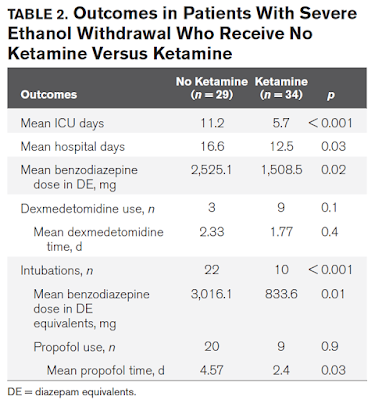