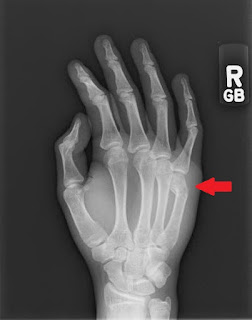 I love saving time in the ED. Much of this can come from avoiding procedures that don’t provide benefit to the patient.

Should we dump plaster casting for Boxer’s fractures?

This was an RCT from Queensland, Australia. Evidently, they do a lot of punching in Queensland.

They included patients between 18-70 years old, simple closed fractures without rotation and an angulation of less than 70 degrees. Yes, you read that correctly, they tolerated up to 70 degrees.

126 patients were randomised to buddy taping or plaster cast immobilisation.

The primary outcome was hand function at 12 weeks using the quickDASHquestionnaire. They also looked at pain, satisfaction, return to work or sport, and quality of life.

As expected with this cohort of patients, there were quite a few lost to follow up and 97 patients underwent intention to treat analysis.

At twelve weeks, both groups were the same on the quickDASH questionnaire. Those randomised to buddy taping returned to work earlier than those in the plaster group. Other measures were also similar. Ultimate fracture angle at follow up was similar at about 30 degrees.

The authors conclude, “we advocate a minimal intervention such as buddy taping for uncomplicated boxer’s fractures.”

However, there were several limitations to this study. It was not blinded which could have introduced bias. The study design should have really been a non-inferiority trial.

But there may have been a bigger issue.

The quality of the conclusion is only as good as the validity of the primary outcome measure. I’m not convinced that the quickDASH questionnaire is robust enough to reliably measure the big picture. In addition, capture of data may not have been the most discerning; thus pushing the conclusions towards the null hypothesis.

In the end, our referring doctors (ortho, plastics, or hand specialists) are going to dictate their preferences to us. Given the overall quality of the evidence, I don’t have a problem doing what they like.

My local hand specialists have asked us to continue with plaster immobilisation. They feel you can get a better reduction using the Jahss technique, have less initial pain, less narcotic use and possibly require less operative reduction. Of course, this is an eminence-based recommendation. If I moved to Queensland, I will probably be buddy taping... and watching my back.