Intranasal ketamine for analgesia prior to digital nerve block- A double blind RCT!!?? 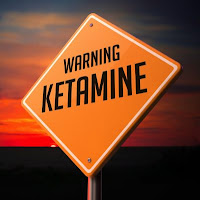 This was reportedly a double blind RCT of intranasal ketamine 50mg vs. saline placebo prior to performance of digital nerve blocks at a single centre in Iran. All the blocks were done by one doctor (listed as the third out of seven authors).

The primary outcome was reduction of pain during the block as measured on a visual analogue scale (VAS).

The authors conclude, “… IN Ketamine can be effective in reducing pain in patients with acute pain, without adding significant side effects.”

I doubt that many of us would consider giving ketamine prior to a digital nerve block. It does seem rather excessive and puts the patient at risk of side effects. (Reminds me of propofol for migraine) Perhaps we might consider inhaled nitrous oxide or intranasal fentanyl?

Unfortunately, there are a few problems and red flags with this study.


Regardless of this study's conduct or limitations, I’m not a big fan of intranasal ketamine. Not great bang-for-buck and an undesirable side effect profile. In addition, we have experience with other drugs that are more efficacious.