From the Journal of No Shit comes this study looking at whether cardiac activity on ultrasound during ACLS is associated with improved survival.

This observational study was conducted in 20 ED’s in North America in patients presenting to the ED in PEA or asystole. Ultrasound was performed at the beginning at the end of ACLS and they looked at several outcomes.

793 patients were enrolled. 13 (1.6%) patients survived to hospital discharge (no mention if they were neurologically intact.)

For what it is worth, cardiac activity on initial ultrasound was the variable with the strongest association with survival at every endpoint investigated. In addition, they found 34 pericardial effusions and some patients with suspected pulmonary embolism.

Caution is in order as 3 patients with no initial cardiac activity on ultrasound survived to hospital discharge.

I think the most valid conclusion is PEA and asystole are extremely terrible prognostic signs regardless. Ultrasound without cardiac activity is also dismal (but not 100% perfect).

I have wondered why so much time & effort was put into answering a research question that seemed so obvious. It’s kind of up there with the parachute study… But I guess point-of-care ultrasound is still in the stage of trying to prove itself worthy. 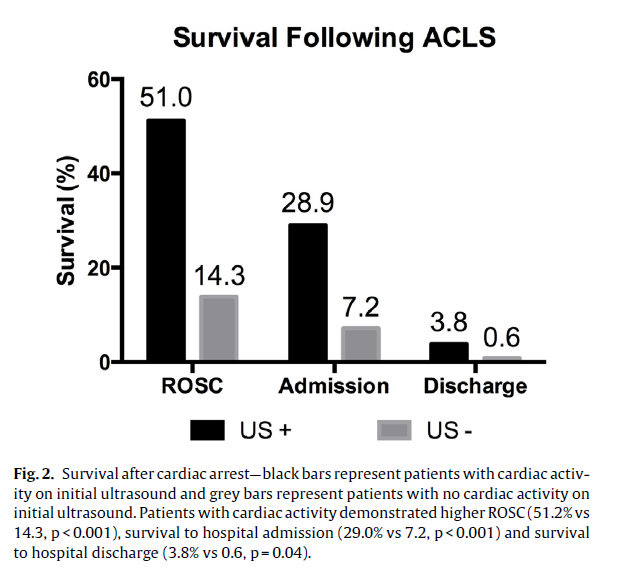