Compression Therapy to Prevent Recurrent Cellulitis of the Leg… way to go Bruce! 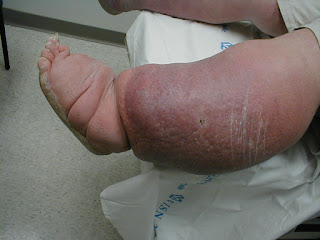 We’ve all seen them…

Those big red chronic oedematous legs that we diagnose as cellulitis. We start IV antibiotics and admit. But those same legs come back to the ED again and again…

Hummm... should we be doing something to prevent recurrent cellulitis in oedematous legs?

These investigators from the Public Hospital Bruce, Canberra, conducted a single centre non-blinded RCT of patients with chronic oedema of the leg and recurrent cellulitis. Participants were randomised to leg compression therapy vs. control.

The primary outcome was recurrence of cellulitis as diagnosed by GP’s or hospital physicians and confirmed by trial assessors. There were a bunch of secondary outcomes including measuring leg volume with the use of a perometer (huh?), quality of life, adherence to intervention etc.

Shortly after starting the trial, lymphoedema therapists who were aware of the group assignments noticed a potential large treatment effect and brought it to the attention of the Human Research Ethics Committee (HREC). Stopping rules were added to the study protocol. As expected, the trial was stopped early for efficacy.

In the end, 84 patients were enrolled with 23 episodes of recurrent cellulitis. There were 6 (15%) patients with cellulitis in the compression group and 17 (40%) in the control arm.

Wow… an absolute reduction of 25% or NNT of 4. This is crazy efficacy.

(Just in case you were curious, the perometer showed a between group difference of -240ml in leg volume over time.)

Critics of this trial could justifiably point out that it was really small, stopped early, and conducted at single centre.  But perhaps the biggest limitation was the diagnosis of recurrent cellulitis is subjective and it was adjudicated by those who were unblinded- potentially leading to bias.

Either way, these results are very compelling, in line with expert opinion and should be practice changing. As ED doctors, we don’t usually focus on preventative medicine. But this intervention will have much more effect than those countless tetanus immunisations we give away.

Looks like it’s time to get on the compression train.